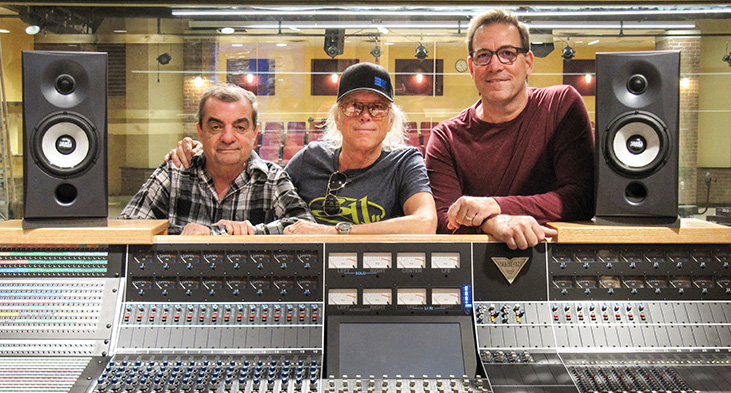 FLANDERS, NJ—Mount Olive High School (MOHS), rated among the top schools in the nation, made some major upgrades to its facilities over its summer recess, including the construction of a recording studio outfitted with an API Vision analog mixing console. “It’s a real, honest-to-God Rock ‘n’ Roll High School—with a Power Station control room,” says producer, engineer and mixer Ron Saint German, who lives in the area and was brought in to consult on the project.

Unlike the rock ‘n’ roll high school depicted in Roger Corman’s classic 1970s B-movie of the same name, where the students choose the Ramones instead of an education, MOHS, “Home of the Marauders,” offers a curriculum to keep even the most rebellious teen happy. And with the start of the 2016-2017 school year, MOHS has added Audio Engineering and a Rock and Roll Academy, both based at the new recording studio, which is known as MPAC.

When Saint Germain says that the new facility has a Power Station control room, he means exactly that. After his name was put forward by a mutual friend when the school district’s superintendent, Dr. Larry Reynolds, went looking for professional guidance as the project neared its final stages, Saint Germain met with the architects
They apparently had no previous experience with designing studios. “I said, if you want to build a world-class studio, I’m happy to help you out. If you want to build this, good luck,” he recalls, after looking at the plans.

Happily, a large portion of the available space, a former gym that had been—and will continue to be—used for wrestling matches, had been set aside for the control room. “In my head, I could see Power Station’s Studio A control room just drop right in,” he says. He called Tony Bongiovi, who opened the Power Station (later sold and renamed Avatar Studios) in Manhattan in 1977. “Tony and I have been friends for 43 years. And I knew he still had the plans for the Power Station.”

“This is the tenth control room that I’ve built. Some are replicas of Studio A; that’s the control room I’ve replicated the most,” says Bongiovi, who licensed his plans to MPAC’s architects.
MOHS, which has about 1,450 registered students in grades 9 through 12, is very technology-forward. The school has long housed a professionally-equipped TV production facility that broadcasts over closed circuit and locally over-the-air. Its robotics department was started in 2000 and has won multiple awards. As part of this summer’s renovations, the school has also opened the new Marauder Innovation Learning Lab, or MILL, equipped with 30 3D printers, in the same part of the facility as MPAC.

“This is not just a room that we threw some equipment into; it’s the real deal,” Bongiovi continues, noting that the original room has generated hundreds and hundreds of hit records. “The most mindboggling aspect is that these are high school kids. I was in high school in 1966; if you wanted to work for Columbia Records, you had to get an engineering degree from Rutgers University. I was very impressed that the school system would have something this elaborate.”

Jeff DelBello, also based in New Jersey, supplied a portion of the studio equipment and all of the wiring and integration work through his two companies, DB Sound Design and DB Sound Store. “It was such a treat to deal with two guys, Ron and Tony, that really know what they’re doing. I’d be halfway through an explanation and Ron would say, ‘I’ve got it, I know what you’re talking about.’ We were speaking the same language,” says DelBello.

“We put in a nice bit of outboard gear, like a Bricasti reverb, some Tube-Tech equipment,” he continues. “Ron asked for some oddball things, like a Lexicon 200, which I’m still looking for.” Saint Germain also recommended Modern Audio Design MAD- Max near field monitors, which he betatested for the company and uses in his home-based studio. “The speakers are quite amazing. They sound really great,” says DelBello. “We also put in a new ear system, the [Hear Technologies] Hear Back Pro. It was my first install for that,” he says. The monitor system can be fed analog from the API desk or digitally from the Pro Tools rig.

Saint Germain took Trevor Campbell, who heads the school’s Audio Production Program, on a tour of studios and mixing consoles, including the Clive Davis school at NYU Tisch, which has an API Vision. “They needed something simple enough that you don’t need a computer to make it work,” he says. “Old school.”

The live room, which can accommodate anything from a small jazz combo to a 60-piece orchestra, can also seat an audience of 250 on three sides of the room and is equipped with three stereo sets of JBL SRX835 three-way monitor speakers. The two original Power Station iso booths are replicated in the control room area rather than the tracking room, but at twice the size, reports Saint Germain.
“At lunchtime, there will be instruments set up, and kids will be invited to come in and jam. At the same time, all the mics will be in place, so those in the recording school will be learning how to record—every day,” says Saint Germain.

“I explained to them that this must be a hands-on situation. That is how you learn to record.”